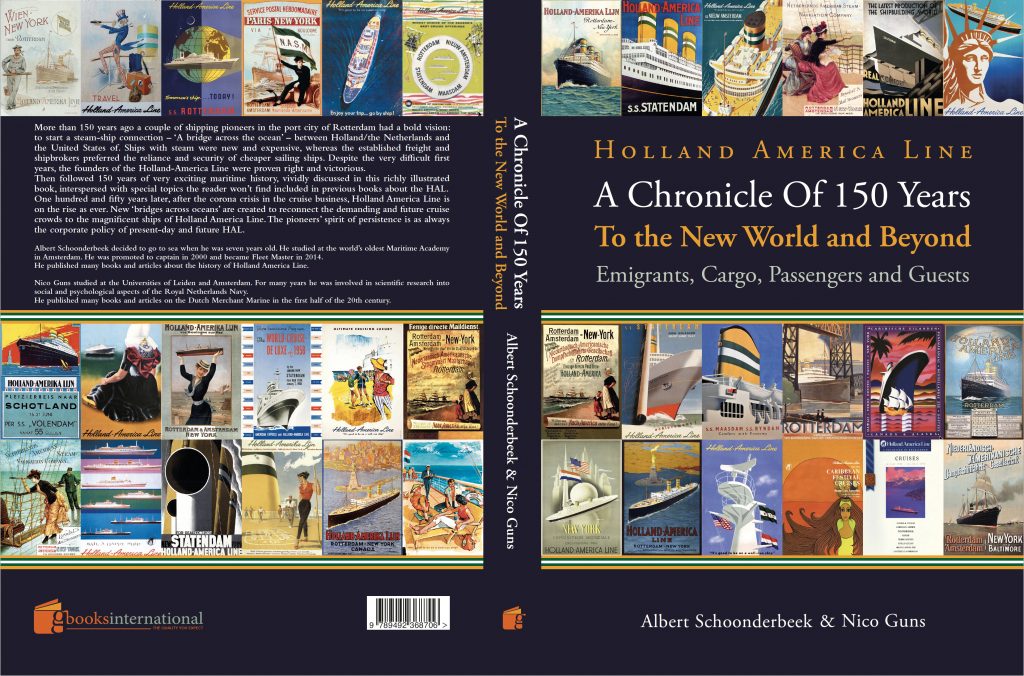 To the New World and Beyond – Emigrants, Cargo, Passengers and Guests

More than 150 years ago in the port city of Rotterdam a group of business companions and steamship pioneers had a bold vision: to establish a steamship connection that would be ‘a bridge across the Atlantic Ocean’ between The Netherlands and North America. They founded a company with two steamships in 1871 and although the company achieved some success it was dissolved two years later. In April 1873, a new company was established with four steamships. This company, ‘Netherlands-American Steamship Company’ (NASM), was better organised and financed, allowing it to quickly expand to offer steady and regularly scheduled services. In 1896 the company added ‘Holland America Line’ (HAL) to its name.

From 1873, 150 years of exciting maritime history followed, created by a versatile shipping company that would evolve into one of the world’s most successful cruise lines. Those 150 years are vividly described in this richly illustrated book which covers many topics readers will not find included in previous books about HAL.

Despite the challenges to the cruise line industry caused by the Coronavirus pandemic, Holland America is still on the rise. HAL creates new ‘bridges across oceans’ and reconnects current and future cruise guests to the company’s fleet of magnificent ships. Today, the same spirit of persistence of its founders remains the cornerstone of HAL’s corporate policy and will continue to guide it into the future.

This book, with a foreword by Mr. Gus Antorcha: President of Holland America Line, is the first volume in a set of five to be published during Holland America’s 2023 Jubilee Year.

The next volume (nr.2, to be titled: “Special HAL History Topics”) is scheduled to be published in April 2023 and contains a multitude of highly interesting historical issues never before covered in any other HAL-history book.

Volumes 3, 4 & 5 are to be published in the second half of 2023 and will be the ‘Pictorial History Companions’ of volumes 1 & 2. They contain many hundreds of rare and special photographs sourced from historical archives and all images are accompanied by highly detailed captions.

The complete set of volumes will come with a representative hardback book-cassette.

Capt. Albert J. Schoonderbeek BSC. MNI. decided to go to sea when he was seven years old. He studied at the world’s oldest Maritime Academy in Amsterdam. HAL promoted him to captain in 2000, and to Fleet master in 2014. He has published many books and articles about the history of Holland America Line.

Dr. Nico Guns Ph.D. studied at the Universities of Leiden and Amsterdam. For many years he was involved in scientific research into social and psychological aspects of the Royal Netherlands Navy. He has published many books and articles about the Dutch Merchant Navy in the period 1860–1960.

Note: for the US, UK and AUS all postage is included in the retail prices.

The NL and CAN retail price does not include local/national postage.

Any cookies that may not be particularly necessary for the website to function and is used specifically to collect user personal data via analytics, ads, other embedded contents are termed as non-necessary cookies. It is mandatory to procure user consent prior to running these cookies on your website.